The main event of Puglie Palooza 2021 was the Detective Game - Puglie and the Disappearance of the Delicious Doughnuts, an online choose-you-own-adventure game that spanned across multiple artists and sites.

Experience the game here!
(Click the Artist's names to go to their slides)!

The game was inspired by another fan, who after experiencing a digital scavenger hunt I had last year on Pugliepug.com, suggested a larger one that was like a game of detective, the idea stemming from her studies in criminology. As with all my plans, it always starts with a story, and all it took was me thinking, "What if someone ate Puglie's doughnuts?"

This idea stuck with me for the entire year. I had written it down in my to-do list, and with Puglie Palooza coming up, I figured it'd be the perfect time to do something so grand (I sit here now thinking perhaps it wasn't aha). Outside of my initial story idea; however, I haven't elaborated on it at all! I sat down one evening and tried going over the details in how I was going to execute this event, and the story.

"Okay, so Puglie's investigating his doughnuts getting eaten. Does he just have doughnuts around 🤔 ? OH, what if, since it's Puglie Palooza, Puglie got a LOT of doughnuts for the fans and attendees 💡 !

Okay, okay, but who would he investigate though 🤔  ? Ollie? Uhh... oh how about members of the Puglie Team? But how would he start investigating? He needs clues... what clues would there be outside of crumbs... what if something could leave clues? Oh my god, what if Puglie got to talk to Mako or something? And Mako would start screaming at him? That'd be funny 💡 !

WAIT. If Puglie investigates Mako, then it would lead to Mako by a clue like... pine nuts??? Or a feather! OH! A YELLOW FEATHER! OH OH OH, THAT'S A CLUE! WAIT, THERE ARE OTHER ARTISTS WITH ORIGINAL CHARACTERS TOO! 💡💡💡 "

As usual, the moment my train of thought starts going, I have to word dump my brain in to text so I don't have to remember everything. Here's my initial draft of the first bit of my Detective Game planning. 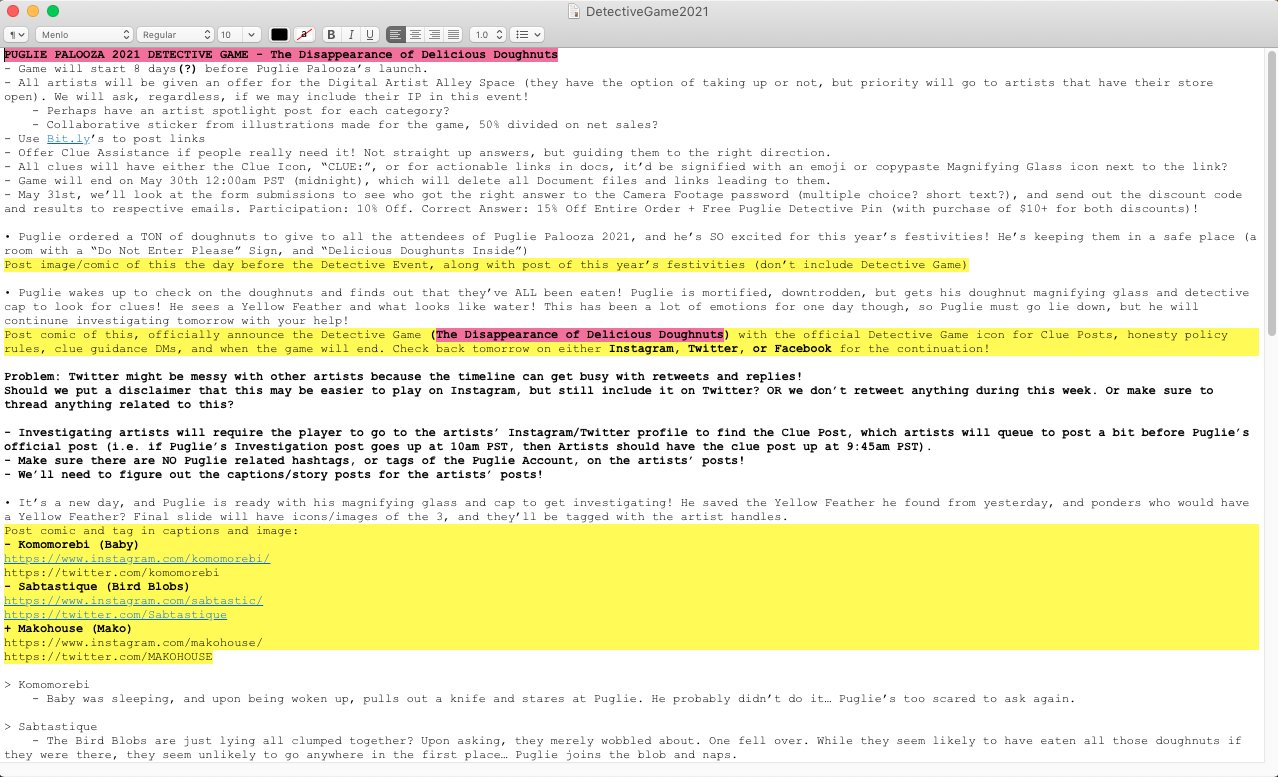 One thing I definitely (tried) to keep in mind was scope of the project and the difficulty level of the game.

I chose three artists per round, as three is a good number of choices. After two rounds, the end of the game was linear with you going through each Puglie Team member. On paper, I felt that this was a decent sized scope for myself, and hopefully enough content for fans to go through and enjoy.

I knew that social media was the way to play since it's more accessible, but the organization on those sites were often a mess. I figured perhaps this would add to the difficulty though, and would hopefully encourage fans to look through the artist's media to look for the clue, and enjoy the artist's art along the way! I made a note anyways that Instagram was the easier medium to play on.

I didn't want all the clues linked in Instagram and Twitter because it would've made the game too simple, and I wanted to encourage people to look around, especially on things I wanted more attention on. For example, Puglie's Youtube Channel! Realistically, all the answers for the end half of the game could've  been easily found there if people snooped around!

After triple checking my story and game progression (it still changed a bit along the way anyways), I reached out to the artists I had planned for the game to ask for their permission to use their OC, and their agreement to participate, I got to sketching. A lot. 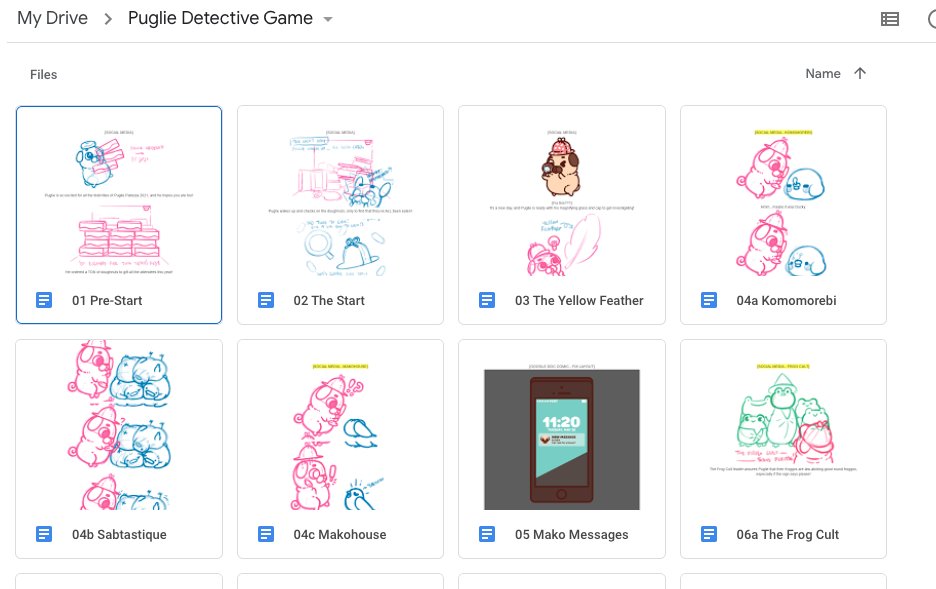 I had drawn all the initial sketches in a single file, and then organized them in to a Google Doc so that they could be played through. That way I could actually test out the story progression with the images. I also took this time to write out the story as captions, organize how it would be presented on Twitter and Instagram, and established the game's syntax to hopefully help make the game more obvious and playable.

For example, all clues that led to somewhere else always started with a 🔎! 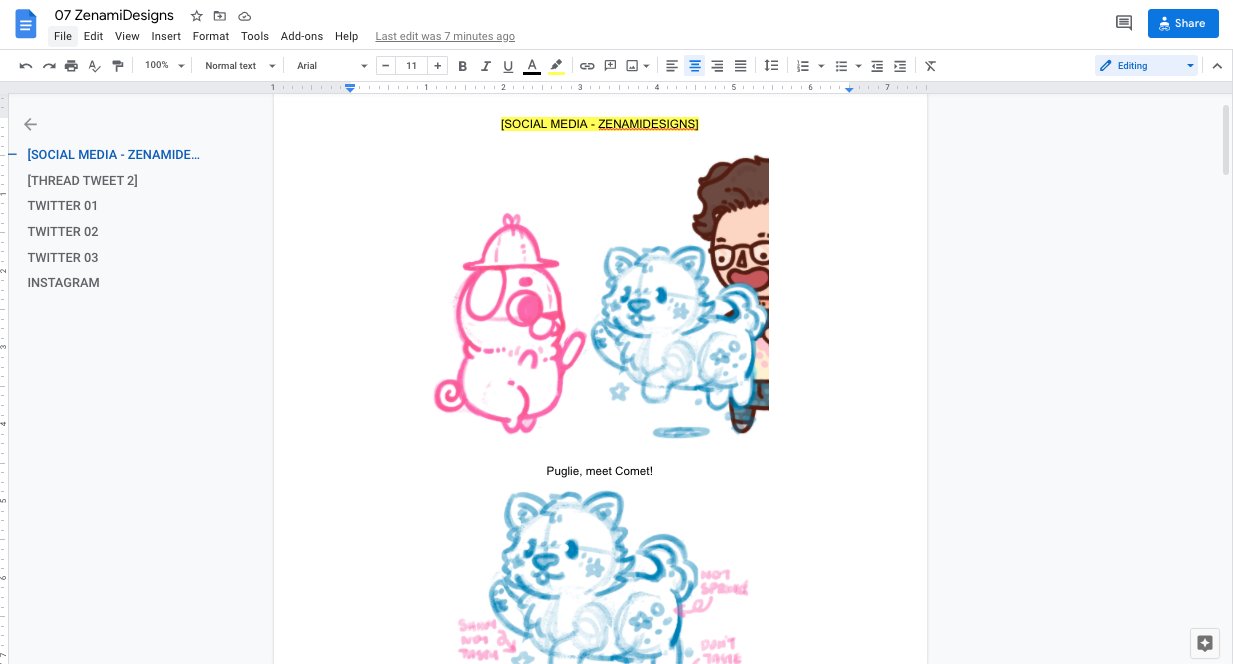 When all this was planned out, and I again, triple checked the game, I created a group chat with the participating artists so that it was easier to organize the upcoming post to launch the game. I also wanted them to check out how the game progressed if they were curious, and if they had any issues or changes they wanted to make. 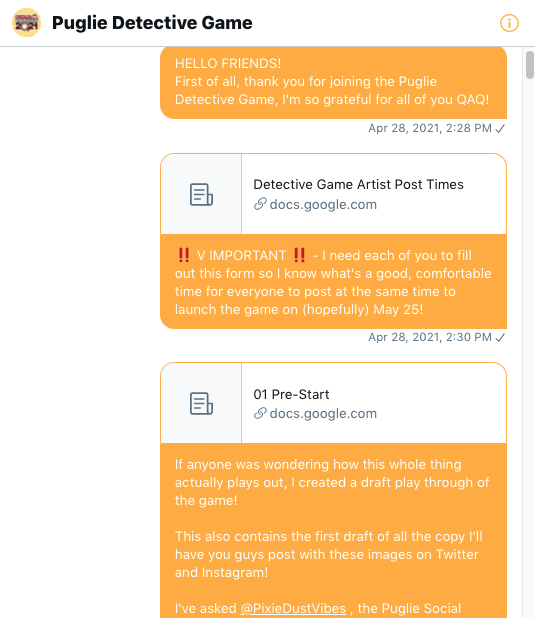 Without any issues, and some kind words from these fantastic people, I got to cleaning up the comic, putting it in proper Puglie Palooza presentation, and blowing up my original Photoshop file to 165mb haha! 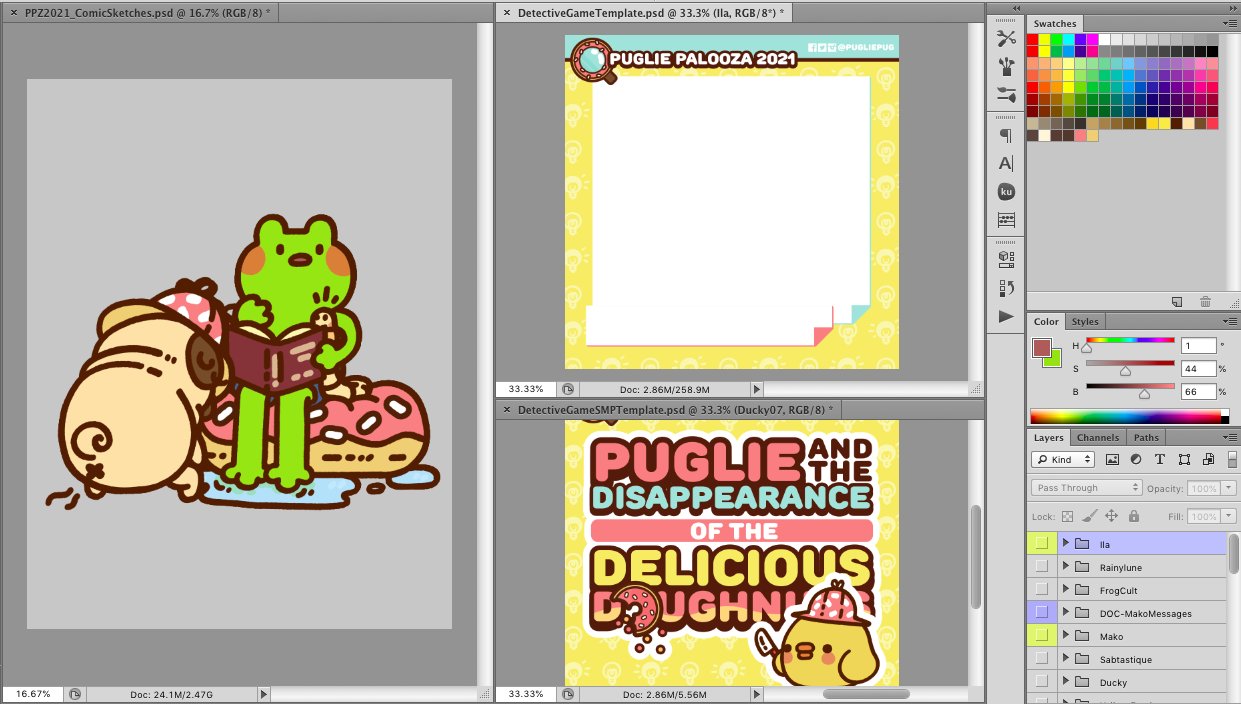 As I was nearing completion, and the date was looming closer and closer, I had to start coordinating how this game was going to launch. Truth be told, I didn't think much about this when choosing the characters that were going to be in this game HAHA, but where there's a will, there must be a way!

I asked all the artists what's the earliest and latest they're comfortable posting; that being a time they didn't have to purposely wake up or stay up late.

With Sabtastic agreeing to post an hour earlier than she initially remarked, and Komomorebi staying right up until her latest time, we were able to match posting times for everyone.

Come May 24th, I got up at 11:45am (Beth got up earlier like a normal adult). We were all hands on deck in the group chat. The coordinated posting was crucial because:
1. The start of the game on Puglie's page was dependent on everyone (that's 7 people) posting, because the game can't start without the meat of the game there!
2. The ideal scenario was to have all the posts up at once, that way people seeing the posts on their fav artists' social media wouldn't be confused by the missing context from Puglie's page.

While I trusted all my friends and peers to be responsible people, launch days are always terrifying to me. What if someone's computer died? What if Twitter's servers went down? What if Beth and I suddenly get locked out of Puglie's Instagram? Ahhhhhhhhh - BUT the game launched smoothly! I could finally let out a huge sigh of relief, and I hopefully was able to convey how absolutely grateful I was for everyone participating 😭💖 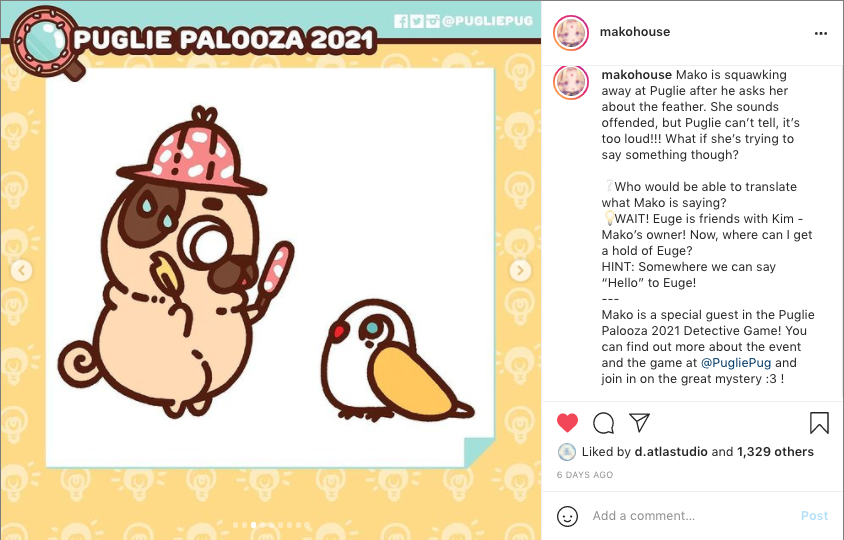 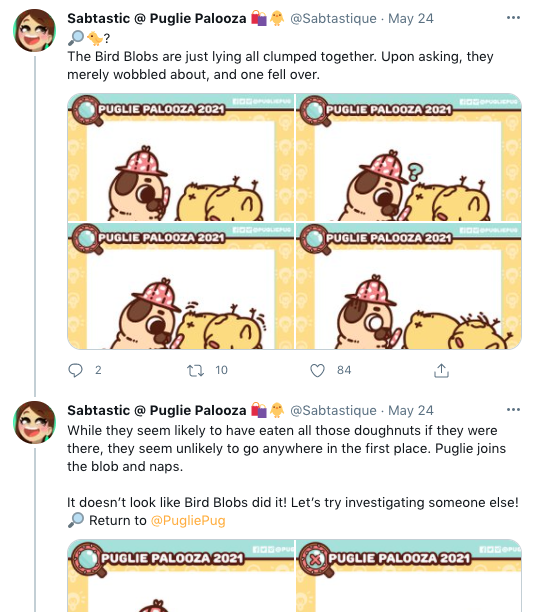 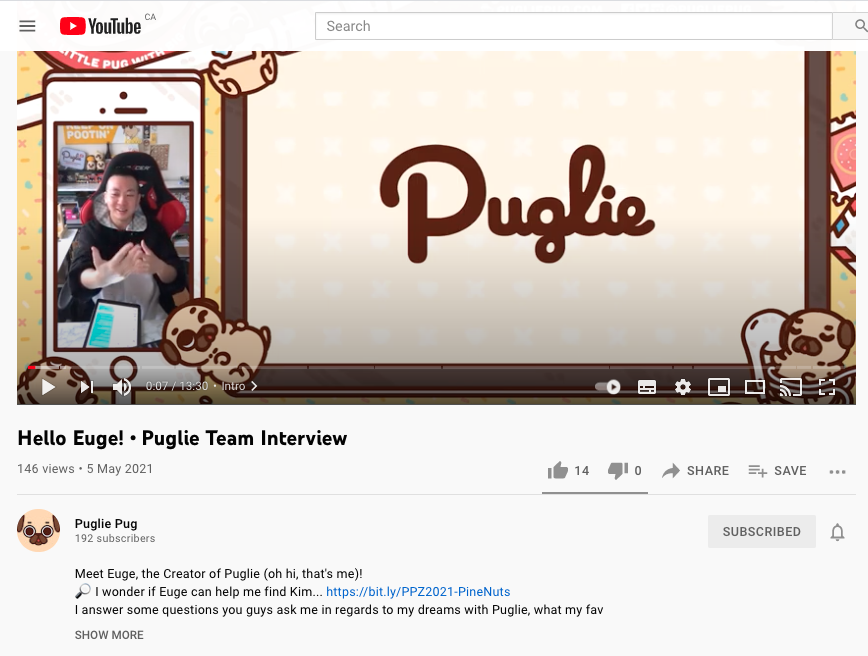 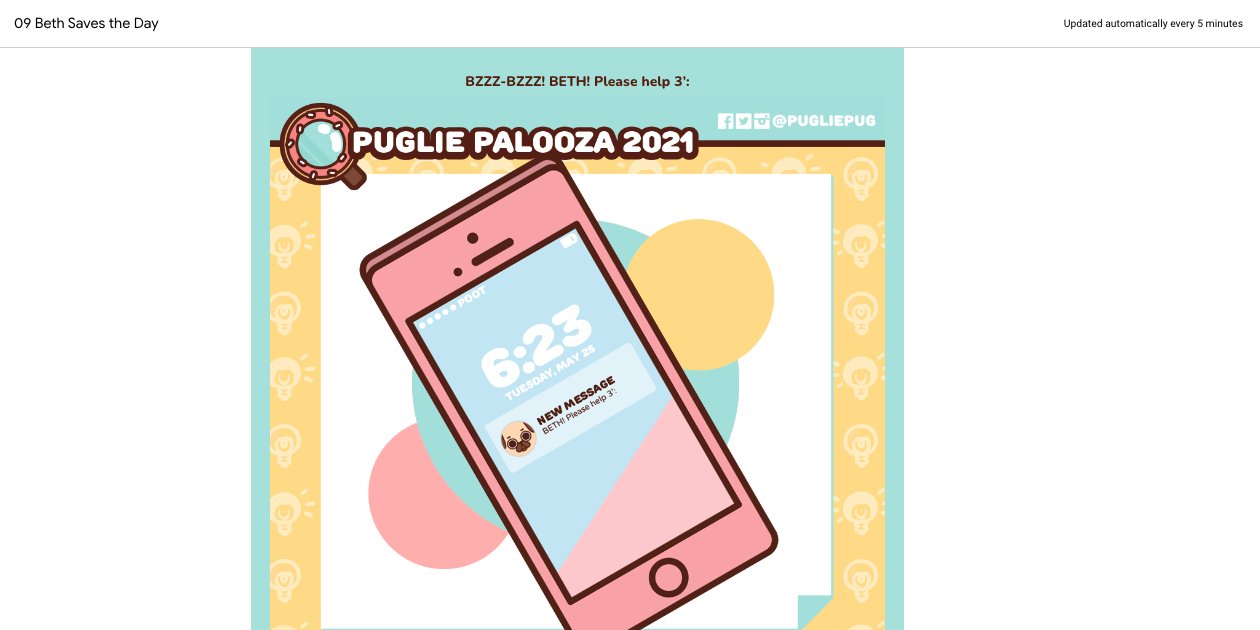 The story and structural planning of this game took 3 evenings back in January.
The comic took a total of nearly 15 days, at 10-12 hours a day. I was terrified of not having it done in time, as I still had other Puglie Palooza things to prepare. I was done on May 14th.

I know it was an event that involved a little more commitment and effort, and it's definitely not for everyone! I sincerely hope that, those who experienced it, really enjoyed it, and those who are experiencing it now via the Completed Version (for a limited time), also do too!

Thank you all for those that did participate during the event and sent me such kind and enthusiastic messages about how much fun you had! It really made me feel appreciated for all the work I put in :3 💖
I can't say I'd do something this large again for a while, but at least I could say I did it, and I can probably do it again if I wanted haha!

Please check out the fantastic artists and friends that were a part of this game, they're the real stars that made all this possible:

Back to The Doughnut Box